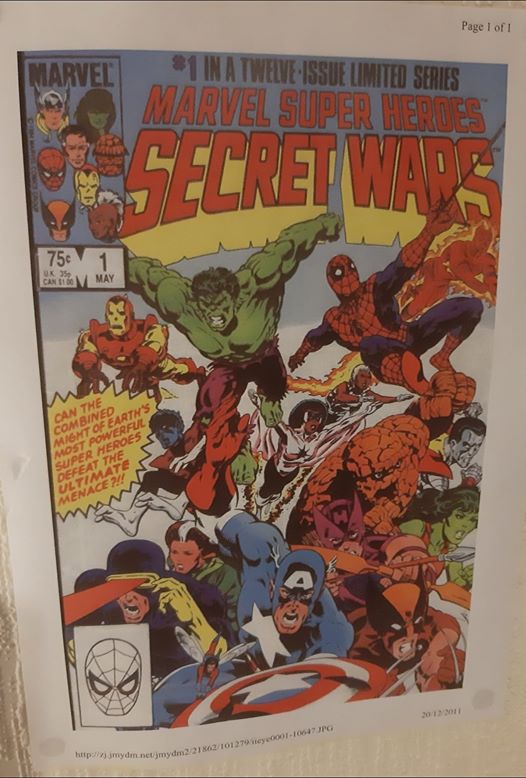 Simon is a member of the Monday group. Before lock down, he had started a video project about comics because it is something he is passionate about. Here is a blog Simon has written at home.

In the story a cosmic being called the Beyonder collects a group of superheroes and a group of supervillains and teleports them to a planet called Battleworld. The Beyonder then declares “I am from beyond! Slay your enemies and all that you desire shall be yours! Nothing you dream of is impossible for me to accomplish! “The superheroes and supervillains then battle each other until attention is turned towards the Beyonder. It was the first major Marvel comic event series affecting the Marvel universe greatly. It changed things for comics. It is a famous limited series and collected all the popular Marvel characters in one comic. The series tied-in with other Marvel comic book series crossing over with other comic books.

This was the limited series that got me into getting American Marvel comics and was one of the first series that I bought. It was sold at Dell’s comic stall in Kirkgate market. The owner wouldn’t let you read the comics, you had to buy them if you wanted to look inside. I first got into Marvel comics when Alex a friend at school had a Spiderman comic one day and I read it. I liked it and later when I went to Boots in town I bought another Spiderman comic and continued buying them. It gave me an interest. I’m a bit of a collector and I suppose collecting comics appealed to me.

Comics are escapist you can forget the real world and your problems. The characters are larger than life and can do these extraordinary things with these amazing powers. Even though its fiction you can be greater than who you are. Comics can be exciting. I guess looking at pictures is easier than reading words. The colourful costumes and pictures didn’t hurt. It can be a good way of getting into visual arts. Comics have been in my life for a long time now. Since I was a kid. It wasn’t cool to like comics back then. My parents didn’t like me reading comics. It’s better now. It’s more okay to read comics now. It’s a bit more respectable.