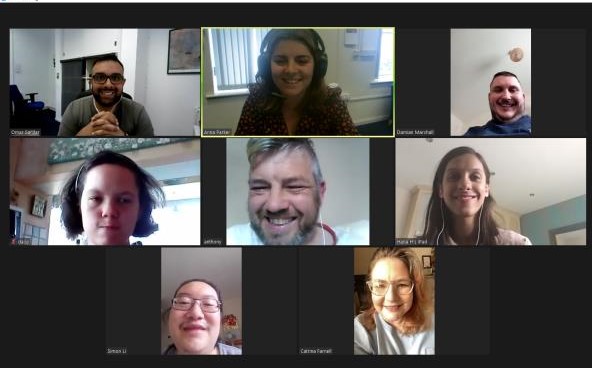 Simon from our Monday group has been working on a blog about one of his passions; comics.

What are some of your earliest memories related to comics?

Some of the earliest comics I got were Starlord, Nutty, Whizzer and chips and Spiderman weekly. I remember putting posters from Spiderman comics on my bedroom wall.
There was the Old master Q comics written in Chinese. They were supposed to be funny. I just looked at the pictures.

In middle school, I read my first Spider-Man comic. It was a Spider-Man weekly from a friend called Alex.
Later I was in Boots in the Kirkgate centre and saw Spider-Man weekly comic number 468. I bought it. This was the first British marvel comic I bought.

I have some bad memories to do with comics.
One day I walked to a newsagent shop to get a comic. It was a fair walk away, more than just up the road. Mum got worried and upset and declared me missing and sent everyone looking for me. I had been gone longer than just a trip to the nearby shops.
When I was walking to the shop I was oblivious to all the drama. When I was walking to the newsagent I thought this is taking some time to get there but didn’t realise the worry it was causing my mum.

How do these memories make you feel?

That memory makes me feel bad of course. It’s another bad mark against me liking comics because my parents didn’t like me reading them anyway. Reading comics was an escape; I could get away from my life and problems when reading comics.

Where have you been to buy comics in the past? Describe these places, were they in Bradford?

In Bradford there was Dells and Rocks Off. Dells used to be in Kirkgate Market and Rocks Off was on Westgate.

There was also It’s a Trap which was on Market Street. All these shops have closed down. There was WHSmith as well.

I was happy when I found Rocks Off. I kept on trying to look for it but never found it. Then one day I saw it; I was excited. I had to walk up stairs to get to the shop. It was on the first floor. It was for me a wonderland of comics, comic heaven. There were racks of comics on the wall. It sold records but I was interested in the comics.
It’s been closed for ages since then. It was a good shop.
It even had marvel comic annuals. Not like the British hardcover annuals you got in British shops. But US annuals were special cos you never used to get them in British shops.

Dells was a stall in Kirkgate market. Comics were not on shelves, there was not enough room for there to be all shelves in the market stall. The comics were sold on a counter.
He wouldn’t let you read the comics. You could only look at the covers. You couldn’t look inside. If you wanted to look inside the comics you had to buy them.
I bought Marvel super heroes Secret Wars from Dells. Secret wars was a major limited series (see previous article). Dells also sold Marvel limited series comics like Iceman.

When I was studying in Sheffield in the 90’s I would go to Sheffield Space Centre and Nostalgia and Comics. To get to Sheffield space centre I had to walk a way out of the city centre to it. There were posters on stands in front of the comic shelves which were a bit in the way. Again I was happy to have found it. I could buy comics again.

Nostalgia and comics was in the city centre. You could use your NUS card for a discount which was good. I was studying at Sheffield from 1990 to 1993.
It was one of my main haunts while I was in Sheffield buying comics. I’d go to nostalgia and comics then go to Safeway supermarket shopping.
On Saturday’s the upstairs was open and they had extra things like memorabilia.
I used to go there after I’d been to lectures at polytechnic/university (polytechnics changed to universities in 1992)

If I wanted to go to a comic shop now I’d go to Leeds. They have Forbidden Planet, Travelling Man and Ok comics. There was Odyssey 6 but that’s closed down.

When I’ve been to London, I went to Showcase comics and Forbidden Planet. In 2008 I went to London Forbidden Planet, the comics were in the basement, that was comic heaven. Shelves of comics. I thought just leave me here! I’d be happy stuck here surrounded by comics.